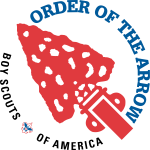 In 1911, a little Scout knocked on the door of E. Urner Goodman asking if he would be a Scoutmaster of a local troop. Wondering what Scouting was all about, Dr. Goodman volunteered and became Scoutmaster of Troop 1. In 1915, believing that those Scouts who best exemplified the spirit of the Scout Oath and law in their daily lives should be recognized, he created the Order of the Arrow (OA). At the time, the OA was known as the Wimachtendienk W. W. In 1934, the Boy Scouts of America approved the Order of the Arrow as part of its program. To learn more about the national program history, visit os-bsa.org.

Uh-To-Yeh-Hut-Tee Lodge 89 was formed in 2016 with the merger of Seminole Lodge 85 and Timuquan Lodge 340.  The merger was effective during the weekend of August 5 – 7, 2016.  The transition team chose the name, which means lighting, and the totem, which is the Bull. Uh-To-Yeh-Hut-Tee Lodge has been serving the Greater Tampa Bay Area Council and our local communities since 2016. To view our past lodge chiefs and advisers, vist the Lodge Chiefs & Advisers page.

In 1936, two years after the OA officially became part of the BSA program, the council in the Tampa Bay area formed a lodge. The lodge was chartered in 1936 under the name Kiondashama Lodge 85, and the head of Osceola was chosen as the lodge totem. It was soon discovered that the Knight and Wall Paint Company of Tampa had trademarked the Osceola head. At that time, a Pine Tree became the lodge totem. In 1938 the name of the lodge was changed to Seminole Lodge 85 and the totem was changed to the White Ibis.

In 1951 Seminole Lodge lost its charter, but just one year later they were once again active. Seminole was the oldest lodge in the section, had a good name in the area, and has won several competitions. The lodge has had one member serve as national chief in 2003, Nick Digirolamo. At the time of the merger, Seminole Lodge was celebrating its 80th Anniversary.